Backgound:
In September 2017, category five Hurricanes Irma (Sept. 6, 2017) and María (Sept. 20, 2017) devastated the island of Puerto Rico, including its coral reefs. The impacts of storm-generated waves extirpated or significantly reduced most of the populations of the reef building corals Acropora cervicornis, A. palmata and Orbicella annularis across the island’s northeastern coast. These corals contribute significantly to the structural complexity of Caribbean coral reefs. In their absence the three-dimensional structure of most impacted coral reefs has been largely flattened or severely compromised across multiple locations. Because the functioning, resilience, and ecosystems services of coral reefs depend on the structural complexity of the reef framework, there is an urgent need to re-establish the three-dimensionality of the impacted reefs. For instance, the structural complexity of coral reefs facilitates ecological processes such as predation, herbivory and nutrient cycling that in turn help coral and fish recruitment and promote recovery/resistance and restoration success. Furthermore, reef structural complexity is directly involved in wave energy dissipation protecting from the direct impact of waves not only adjacent coastal ecosystems (e.g., seagrass meadows and mangrove forests) but also coastal communities. Therefore, it is critical to incorporate a multi-method restoration approach to recover and boost reef structural complexity, which harnesses ecological processes that facilitate the recovery of habitat availability, functioning, resilience and services provided by coral reefs.

Goal: This project aims to restore the structural complexity of coral reefs that were flattened by the impacts of the hurricanes Irma and Maria in the Island Municipality of Culebra, Puerto Rico. We are employing an innovative multi-method restoration approach that combines the outplanting of artificial coral colonies (ACC) created with emerging 3D printing technology with multispecies outplants composed of morphologically complex branching (A. cervicornis and A. palmata) and massive corals (Orbicella spp.). This project is funded by the National Fish and Wildlife Foundation.

History of our project

One of this project's goals is to increase the number of coral propagation units (coral nurseries). Several research studies have demonstrated that growing coral colonies in propagation units improve their demographic performance (i.e., growth and survival). Coral propagation units can, among other things, reduce competition-related stress. Many fragment-based aquaculture techniques (e.g., A-frames, hanging ropes, coral trees) have been developed to promote the recovery of coral reefs ecosystems. This human-assisted asexual propagation has been put into practice in at least 12 localities in the wider Caribbean. 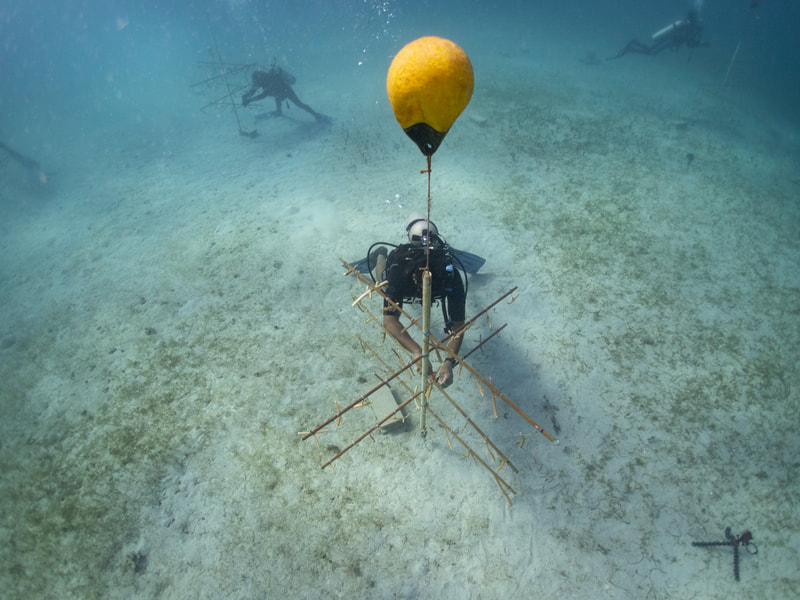 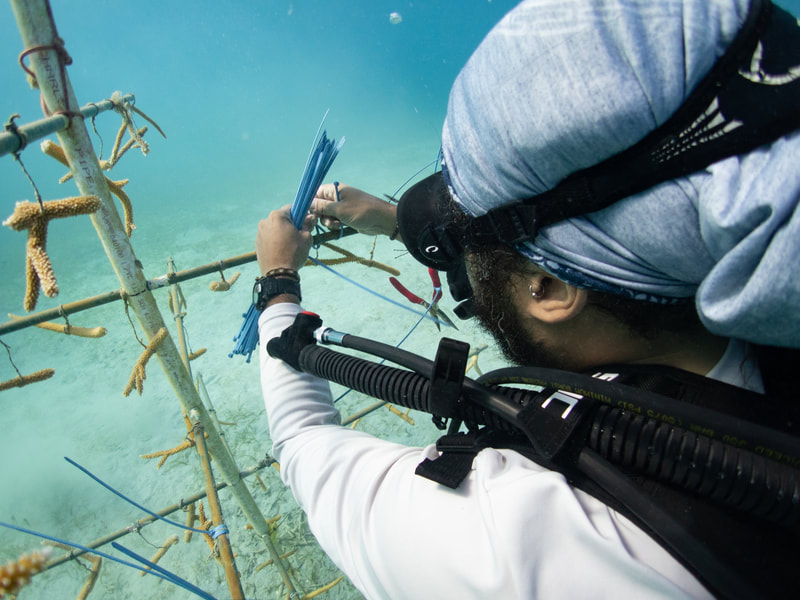 Fieldwork 5 & 6: Selection of areas that will serve to evaluate the success of the project

The objective of these two fieldwork sections was to demarcate the areas that will serve to evaluate the success of the project. We aim to quantify the effect of increased reef-three-dimensional structure on fish and coral community and coral outplants' demographic performance. We used the data collected during Fieldwork # 4 (e.g., benthic composition) to select the locations. The selection was based on the absence/very low abundance of ESA listed corals, the presence of suitable areas for coral outplanting, and areas of low topographic relief. Sandy areas and areas where the reef substrate did not cover at least 400m2 were excluded. Twelve localities were selected per site. At each locality, four 10m x 10m (100 m2) transects were demarcated. Each plot was identified with a numbered tag, a rod at the beginning of the transect, and two nails at the beginning of each plot's corner. Of the twelve transects, three will be impacted using only coral outplants; three will be impacted using only 3D-printed corals; 3 will be impacted by combining coral outplants + 3D-printed corals, and 3 will serve as controls (no coral outplants nor 3D-printed corals). At the end of the fieldwork sections, 12 points were finished at Punta Maguey and 12 at Punta Tampico. 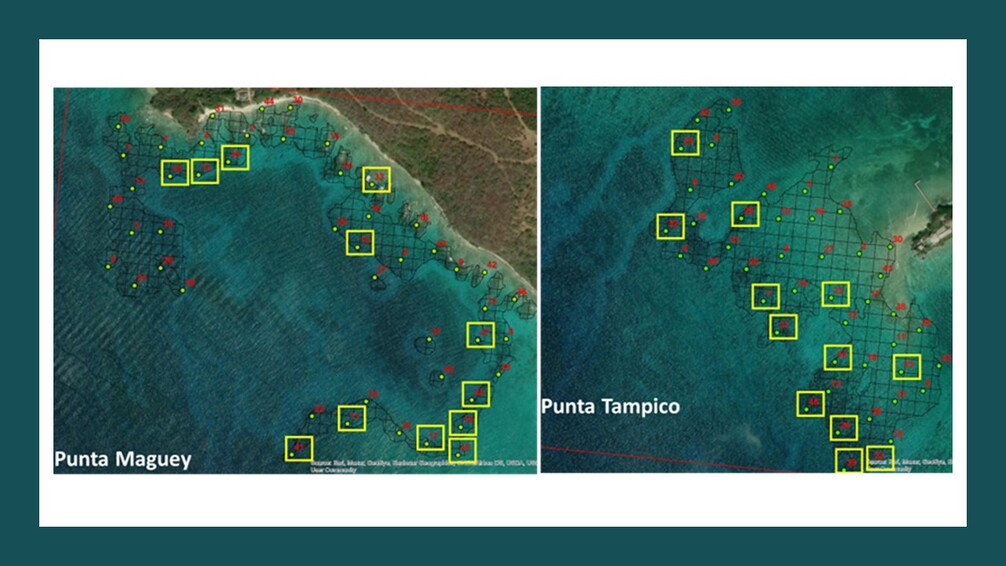 Yellow squares indicate sites selected for the experimental phase of the project.

The purpose of this fieldwork was to continue with the fish surveys (at Pta. Tampico) and collect data on coral recruitment that were started during fieldwork 7. We also started to measure the reef complexity using digital level gauges (see Dustan et al. 2013). Using digital gauges allow us to record data every second, see Dustan et al. 2013 for a complete description and protocol of the methodology. In total, eight stations were completed in Pta Tampico. The data obtained from the sensors will be validated using the traditional chain technique. 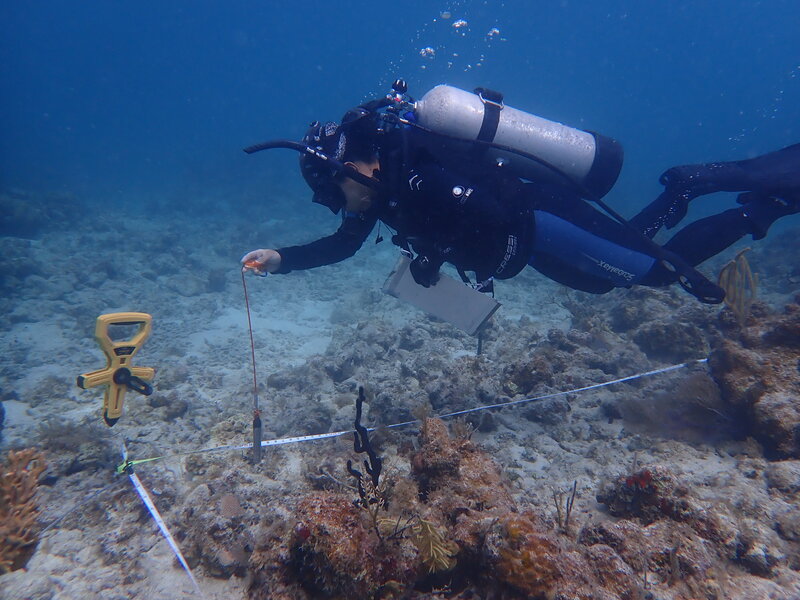 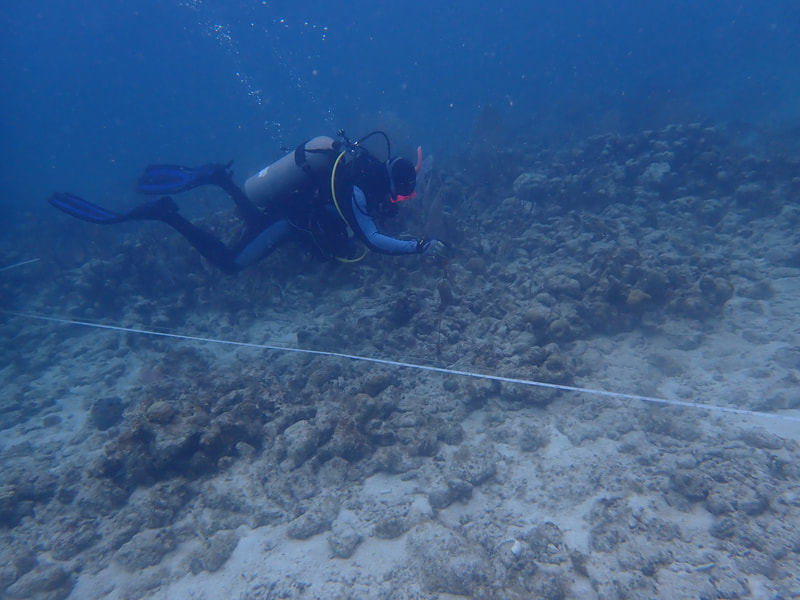 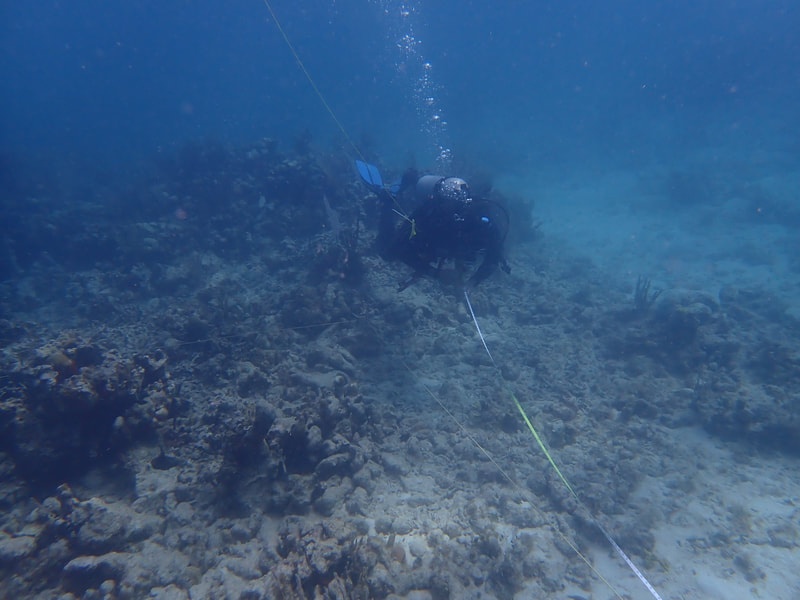